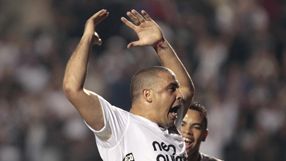 The former Real Madrid, Barcelona, AC Milan and Inter Milan striker is seen as holding the key when his present club Corinthians face Cruzeiro, where he burst onto the scene as a 17-year-old, in a potential title decider on Saturday.

The two teams are neck and neck on 60 points from 34 games, one behind leaders Fluminense, with four matches each to go.

Both teams are aware that the Phenomenal One is likely to be the decisive figure, despite his modest total of five goals in the championship.

"Of course Ronaldo is different and his presence changes the game... there are players who play better when he plays. We have to be very careful," Cruzeiro coach Cuca told reporters.

With Ronaldo playing the full 90 minutes in each of their last five matches, Corinthians have put together a run of three wins and two draws, recovering from a five-match winless run when their number nine was sidelined.

Conscious of his importance to the team, Ronaldo said he would do his utmost to play in Corinthians' remaining matches as they attempt to win the title in their Centenary year.

He has managed a run of six consecutive appearances only once previously this year.

"I'm going to play for sure but it's clear that the day after each match one's body hurts a lot.

"I don't have the same powers of recovery of a 20-year-old," said Ronaldo, who plans to retire when his Corinthians contract expires at the end of next year.

A draw would not be a good result for either Corinthians or Cruzeiro, but Ronaldo sees the title race going to the wire.

"Fluminense are ahead of us but they'll still drop points. That's why we must be concerned with taking ours to be champions," he said.

"Everything will only be settled on the last day."