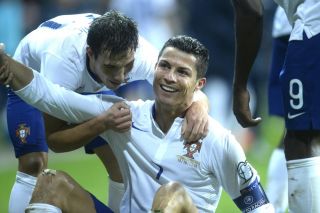 Ronaldo headed in a 95th-minute goal as Fernando Santos' men recorded a 1-0 win and their first in Euro 2016 qualifying on Tuesday.

The Real Madrid star felt his side were worthy winners in Copenhagen, and said he knew Quaresma would cross to the near post.

"You need a bit of intelligence in your movements, and I know Quaresma and knew more or less where he would put the ball, so I moved towards the near post," Ronaldo said.

"Because they're all very tall players – and when it's a hard cross it's very difficult to win it in the air – I guessed the near post and I did what I had to do, which was trying to put the ball in the net.

"I'm very happy for the work the team put in during the 90 minutes. We were deserved winners because we created more chances. The team is to be congratulated."

The win lifted Portugal to third in Group I, a point adrift of the top two of Albania and Denmark.

Ronaldo praised Santos and said the late goal came because of his team's belief.

"We must always believe," he said.

"I always believe until the last minute because I know that some time or other the ball will come, and I need to be there and try to do my best, which is score goals if they give me the chance.

"Obviously the coach has been doing a great job – he's a great man, a great coach and he passed on that confidence to us at half-time so we are very happy with him."