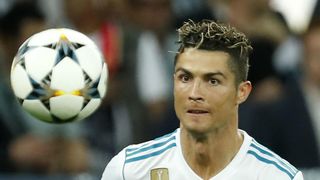 Juve were been beaten finalists in 2015 and 2017, the latter defeat coming at the hands of Real Madrid courtesy of a double from Ronaldo, and they last won the title in 1996.

The Bianconeri announced on Tuesday they had stumped up €112million to sign the Portugal captain on a four-year deal after nine illustrious seasons at the Santiago Bernabeu.

Juve now possess a player who has won five Champions League titles, four of which have come in the past five seasons, and is the competition's all-time highest-scoring player.

Allegri has no doubt the prolific forward's arrival takes them a step closer to clinching the European success that is so desperately craved in Turin.

"Winning the Champions League has always been the goal and the signing of Ronaldo certainly gives us a greater chance to achieve it," said Allegri at an event organised by the European Parliament.

"But that together with Serie A, the Coppa Italia and the Supercoppa Italiana are the four goals for which Juventus have always played.

"I have absolutely not heard from Cristiano Ronaldo on the phone. On Monday I think there will be a news conference, so I'll see him then.

"I know he is very happy. He is a great professional and an important addition for a team that has already done big things.

"I believe the club and the president have not only done an extraordinary thing for Juve, but especially for Italian football.

"[He will play] as he always did: trying to score goals."

Allegri was linked as a candidate to replace Zinedine Zidane at Madrid during the close-season and he explained why turned down the chance to coach at the Santiago Bernabeu.

"I only followed my instincts. This was definitely not an easy period for me, because my mother passed away a month ago and I had to make different choices as well," he said.

"I talked to Juventus and I'm very well here. I repeat my thanks to [Madrid president Florentino] Perez. I had already given my word to Juventus, who had an important project."