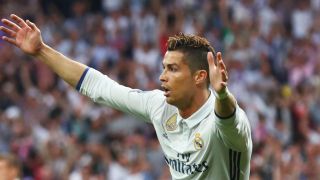 Cristiano Ronaldo became the first player to score 50 goals in the knockout stages of the Champions League when he netted against Atletico Madrid.

The Real Madrid superstar headed in a 10th-minute opener at the Santiago Bernabeu on Tuesday to give the defending champions a 1-0 advantage over their city rivals.

It is the latest landmark to be reached by the four-time Ballon d'Or winner in Europe's premier competition, following a five-goal haul over two legs against Bayern Munich in the previous round.

A brace in a 2-1 win at the Allianz Arena took Ronaldo on to 100 goals in European club competitions, while a hat-trick in the return fixture brought up the 32-year-old's Champions League century.

Ronaldo's Barcelona rival Lionel Messi has the next best knockout return in the history of the competition with 37 goals. Bayern's Thomas Muller is third on 19.