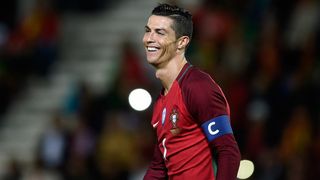 Cristiano Ronaldo has been named in Portugal's squad for the Confederations Cup, but Renato Sanches misses out on selection.

Fernando Santos named the European champions' 24-man group for the friendly with Cyprus, World Cup qualifier against Latvia and the tournament in Russia on Thursday.

While world champions Germany are resting a host of star names, Real Madrid forward Ronaldo is part of Portugal's plans.

Nani, Ricardo Quaresma, Joao Moutinho, Pepe, Bruno Alves and Rui Patricio are also among the experienced players to be called up by Santos.

However, Bayern Munich midfielder Sanches – Young Player of the Tournament at Euro 2016 – and striker Eder, who scored the winner against France in the final, are left out, with Lyon goalkeeper Anthony Lopes also missing out for personal reasons.

It adds to a tough first season in Germany for Sanches, who only started six Bundesliga matches, and he will instead play in the European Under-21 championship in Poland.

The Confederations Cup begins on June 17, concluding with the final on July 2, with Portugal in Group A alongside hosts Russia, Mexico and New Zealand.

Germany are in Group B with Cameroon, Chile and Australia.

Portugal's squad, which includes uncapped Porto goalkeeper Jose Sa, will be cut down to 23 for the Confederations Cup.