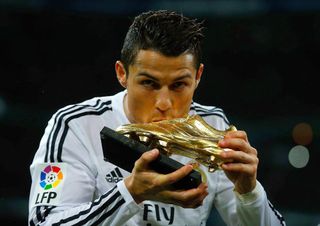 The Spanish newspaper awarded the Real Madrid attacker with the Pichichi and Alfredo Di Stefano trophies on Monday for being the La Liga's top scorer and best player respectively.

The Portuguese attacker, 29, said despite a long list of accolades, including two UEFA Champions League titles and two Ballon d'Or wins, he is not bored by being recognised.

"It'd be great to be back here next year. That would be a clear sign that we've been doing things well during the season," the former Manchester United man said.

"My goal is always to win titles with the team, but also as an individual. I always say it, I work hard to be able to get these awards. So it'd be a great sign if next year I'm back here.

"Every year I try to be better than the previous year.

"I know a time will come when I can't surpass what I did the previous year, but well, we'll have to wait for that.

"I am very happy, the team is doing great, we are improving day by day, my numbers are great, so I would love to continue on this level, working as I have been doing so far."

Ronaldo claimed his third straight Di Stefano trophy, but it was the first Marca awards night since the Real legend's death in July at age 88.

Ronaldo said he was inspired by the former Real striker, coach and honorary president to improve.

"I'm sad because Don Alfredo is not here to give me the award, he was a legend," he said.

"A person I admired a lot, I saw a lot of videos and he was a machine. To be linked to him is an honour, a privilege.

"It gives me motivation to keep on working. He's a man that everybody loved, I didn't know him before arriving here, he was an exceptional person. So I'm very sad he's not here to hand me this award."

Atletico Madrid coach Diego Simeone was awarded best coach after leading his team to the La Liga title, while his goalkeeper Thibaut Courtois - now with Chelsea - was named best shot-stopper.