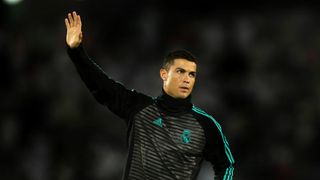 Cristiano Ronaldo is the top goalscorer in Club World Cup history, taking the record away from Lionel Messi.

Ronaldo beat Messi to the Ballon d'Or crown last week, proclaiming himself the best player in history - ahead of Messi - after picking up his fifth Golden Ball.

And Ronaldo was in the mood to justify his own hype with a decisive goal in Wednesday's Club World Cup semi-final against Al Jazira, hauling his side level after they had surprisingly fallen behind.

Ronaldo was played through on the right side of the penalty area and drilled a fine finish into the far corner to collect yet another goalscoring record.

RECORD-BREAKER!With levelling the scores in Abu Dhabi, the man becomes the 's all-time top scorer, registering his sixth goal in the competition! December 13, 2017

The Portugal superstar was then in the thick of the action again, just failing to get a touch on a shot from Gareth Bale that crept home to put Madrid in front.

Messi, his Barcelona team-mate Luis Suarez and Cesar Delgado had all been level on five Club World Cup goals prior to Ronaldo's latest strike.

Earlier this month, Ronaldo became the first player in the history of the Champions League to score in each group game.