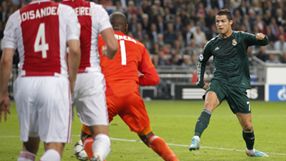 Chasing a 10th European title that has eluded them since 2002, Jose Mourinho's side opened a 2-0 lead against a disappointing Ajax with a goal either side of the break but gave the Dutch champions hope with some sloppy defending before Ronaldo struck twice in two minutes late on to kill the game.

It was the Portuguese forward's first Champions League treble and lifted him to 42 goals in 82 matches in Europe's elite club competition.

With Sunday's La Liga 'Clasico' at Barcelona looming, it also gave him the edge in his personal scoring duel with Barca's equally prolific forward Lionel Messi.

Ronaldo, the last player to be named World Player of the Year before Messi won the last three awards, has 12 in all competitions compared with 10 for the Argentine.

"It was a very complete game on our part and it's very important for the next match to boost confidence," Ronaldo said in an interview with Spanish television.

"Scoring three goals is important for me and I am very happy," he added, clutching another match ball to add to his growing collection. Ronaldo also netted a hat-trick in La Liga against Deportivo Coruna on Sunday.

"These collections are always very important for me but the most important thing is the team," he said.

The victory consolidated Real's lead at the top of Group D with six points from two matches.

Borussia Dortmund, whom Real visit on Oct. 24, have four points after Wednesday's 1-1 draw at Manchester City, with City on one point in third and Ajax on zero in fourth.

In only his second appearance this season, Kaka showed some of the form that won him the World Player award in 2007, tormenting the home defence and linking up well with Ronaldo and Benzema.

Real dominated the first period but wasted a host of chances before Ronaldo pounced on a loose ball to score from close range in the 42nd minute.

A toothless and sloppy Ajax, coached by former Netherlands international Frank De Boer, looked a shadow of the side that has won four European titles and hardly threatened Casillas's goal before the break.

Real doubled their lead thanks to Benzema's stunner three minutes into the second period.

Kaka floated an inviting cross from the right and the France striker leaped acrobatically to send a crashing volley past Ajax goalkeeper Kenneth Vermeer.

Real's vulnerability at set pieces gave Ajax a lifeline in the 56th minute when Niklas Moisander stole in at the far post at a corner and nodded under Iker Casillas.

However, Ronaldo then curled in his second and Real's third from distance in the 79th minute and clipped a delightful shot over Vermeer to make it 4-1 in the 81st.