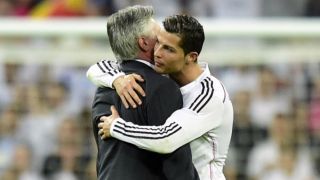 Ancelotti was sacked by Madrid in May after a 2014-15 season which yielded the UEFA Super Cup and the FIFA Club World Cup, and will take over at Bayern Munich when Pep Guardiola departs at the end of the current campaign.

Ronaldo was vocal at the time of his affection for the Italian and that was evident once more when the results of the voting for the coach award were revealed following the ceremony in Zurich on Monday.

The Portuguese voted for another former Madrid boss Jose Mourinho in second after he led Chelsea to the Premier League title while Guardiola earned Ronaldo's final vote.

There was no nomination for Barcelona's Luis Enrique despite him leading the Catalan giants to the domestic double of La Liga and Copa del Rey as well as the Champions League crown.

Lionel Messi, who claimed his fifth FIFA Ballon d'Or ahead of Ronaldo, voted for Luis Enrique followed by Jorge Sampaoli, the Argentine who guided Chile to the Copa America title, and Atletico Madrid boss Diego Simeone.

Surprisingly, Luis Enrique did not receive Argentina boss and former Barca coach Gerardo Martino's vote with it instead going to Simeone with Sampaoli and Guardiola second and third.