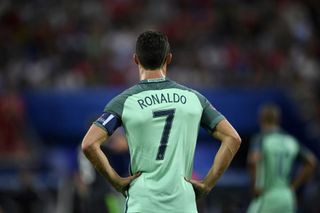 Portugal star Cristiano Ronaldo insists Euro 2016 feels different to his previous final with the national team over a decade ago.

The Real Madrid forward was a teenager when he started his country's shock 1-0 loss to Greece in the 2004 decider in Lisbon.

Ronaldo and Co. are in another European decider after overcoming Wales to set up a clash against either France or Germany on Sunday.

The 31-year-old captain said it was a far different situation for Portugal this time.

"Yes, this is different. I was 18, that was my first final. My debut. Now 12 years have gone by and now we are going to play another final. I am very proud of that," Ronaldo said.

"I have always dreamed of winning for Portugal, I hope it is our turn now.

"I am very confident and I believe that all these boys deserve it. I deserve it, Portugal deserves it, the fans deserve it - every single Portuguese person deserves it. They've been amazing supporters.

"We've yet to win anything but it's the final. I don't think many people thought that Portugal would make it to the final, but we are there."

Ronaldo scored two goals at the 2004 edition, while he has three so far at this year's tournament.

The three-time Ballon d'Or winner said he was ready to do whatever was needed by his team.

"I've been trying to help as much as I can, not just by scoring but by fighting, scrapping and helping with defence," Ronaldo said.

"I've given it my all so, like the gaffer says, there has been great team work, the players have been fighting very hard.

"In order to win, we have to have 23 players fighting, but also the fans - we have felt a lot of support from our fans and that gives us an extra boost to go the extra mile."