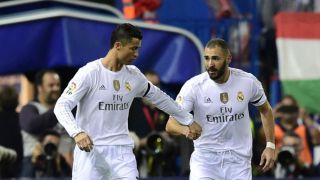 Former Real Madrid coach Carlo Ancelotti believes Cristiano Ronaldo would not be scoring as many goals if it were not for Karim Benzema's hard work.

Ronaldo last month equalled Raul as Madrid's all-time top goalscorer with 323 strikes and has won the European Golden Shoe three times since joining the Santiago Bernabeu side - after previously being awarded the trophy in 2007-08 while at Manchester United.

While the Portugal international's remarkable feats have earned plenty of justifiable plaudits, Ancelotti feels France striker Benzema deserves much of the credit for Ronaldo's success and thinks they form the ideal attacking partnership.

"I think that Ronaldo's success is largely down to Benzema's hard work," Ancelotti told Canal+.

"Karim is a calm guy. He is a very relaxed and humble guy, but he is a great player. I really like Benzema.

"His style of play allows Ronaldo to shine and score, even though he is still a player of the highest level.

"I believe Benzema and Ronaldo are the perfect attacking duo."

Ancelotti guided Madrid to their 10th European title in his first season in charge in 2013-14, but was replaced by Rafa Benitez after they failed to win any major silverware last term.

The 56-year-old claimed he was not surprised by the club's decision to dismiss him and feels his exit was inevitable following the lack of success in his second season.

"The truth is that Madrid probably already wanted me out after one season and that is what would have happened if it weren't for our Champions League win.

"But I was well aware that they would replace me if I didn't win something in my second year."