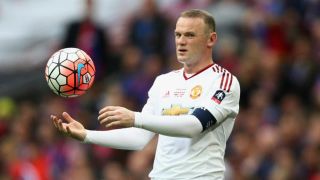 Wayne Rooney has admitted he is feeling pressure to prove himself to Jose Mourinho following the Portuguese's arrival at Manchester United.

A mainstay at Old Trafford having spent 12 years at the club after his move from Everton in 2004, Rooney found the net just eight times in the league for United last term - his lowest total in his time at the club - as they missed out on Champions League football.

Mourinho replaced Louis van Gaal as manager and United have added to their attacking options in the close-season, bringing in playmaker Henrikh Mkhitaryan and striker Zlatan Ibrahimovic.

And Rooney told reporters: "I think you always feel pressure when you play for Manchester United.

"It's one of the biggest, if not the biggest, clubs in the world and it's been a pleasure and a privilege to play for United for so long.

"You always feel you have to prove yourself every season, because it's a dream to play for such a big club."

United have been unable to challenge for the Premier League title since Alex Ferguson's retirement in 2013, but Rooney is hopeful Mourinho can get them back to the top.

"I think you only have to look at the teams he's had before, and the success he's had with them, and we're hoping he can bring that to us. I'm excited for it. It's a big season for us," he added.

"The appointment of Mourinho is a big appointment for us and we're all excited by it. We've made some fantastic signings too.

"Hopefully we can have a good start to the season and be successful by the end of it."