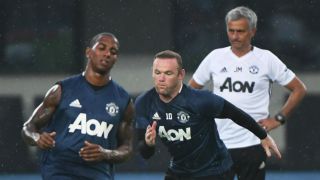 Wayne Rooney has hailed the positive impact Jose Mourinho has made since starting work as Manchester United manager and feels the club are ready to challenge for top honours again in 2016-17.

Mourinho replaced Louis van Gaal as the man in charge following United's failure to qualify for the Champions League last term and Rooney has nothing but praise for his new boss.

"It's always great to get a new manager but when you get someone in the stature of Mourinho he's great to work under and he's brought a winning mentality back to the club," the club captain told Key 103.

"He's come in, he's been great with the players. The training has been hard but enjoyable. We're ready, we're working hard.

"We know it's a big season for us. He's made, in my opinion, some great signings who have gelled in really well with the squad so it's exciting times.

"Manchester United as a football club, we have to win and we have to deliver for him. There's pressure on the players but we're ready and I think this season we'll give a real challenge on all fronts."

United are in action against Galatasaray on Saturday as their pre-season campaign takes them to Sweden.