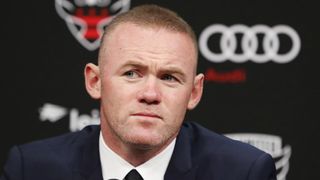 Wayne Rooney is "passionate" about embarking on a career as a manager when he retires from football.

DC United striker Rooney will make his 120th and final England appearance in a friendly against United States at Wembley on Thursday.

Rooney has not played for his country for two years but has been recalled for a special farewell, with some of the proceeds from the game going towards his charity.

The former Everton and Manchester United star is England's all-time leading goalscorer and only Peter Shilton has won more caps for the Three Lions.

Rooney has signalled his intent to finish his career in MLS, with his displays since signing for DC in June firing the club into the play-offs.

Former Red Devils team-mate Ryan Giggs has taken his first step into management, while ex-England peers Steven Gerrard and Frank Lampard are also in their maiden jobs in the dugout.

Rooney intends to follow suit at the end of his playing career, with the 33-year-old already working towards the relevant qualifications.

"It is something I am passionate about and I want to do," Rooney told the Manchester United website.

"Obviously, I need to complete my badges, which I am doing over in the States.

"Hopefully, by the time I come back to England, I will have them completed and be in a position to accept or reject any offers I get."

Rooney is open to working as a television pundit when he hangs up his boots but plans his first step post-retirement to be in coaching.

"There is always time. You have got time to do TV, if that is the way you want to go. I think everyone is different," Rooney added.

"I would prefer to give coaching or management a go. If it doesn't work out then I am sure there would be opportunities to do TV and whatever feels right for you."