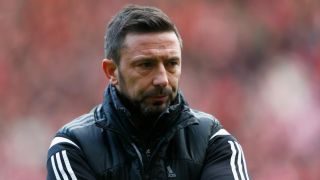 Aberdeen's winless run in the Scottish Premiership now stands at four games after they were beaten 2-0 by Ross County on Friday.

Brian Graham scored a goal in each half to move County up into third in the table and leave Aberdeen at risk of surrendering top spot for the first time this season, with Celtic needing just a draw against Motherwell on Saturday to move ahead.

Graham put the home side in front nine minutes before half-time, turning home after Paul Quinn's tackle on Ricky Foster could only push the ball into the striker's path.

And another error from Quinn allowed Graham to double the lead in the second half, as he capitalised on the defender's missed header to fire with aplomb past Danny Ward.

The league leaders pressed throughout the half for a way back into the match and the post denied Niall McGinn before Adam Rooney's follow-up was cleared off the line by Jamie Reckford.

Gary Woods made a fine save from Rooney but County kept Aberdeen largely frustrated throughout the encounter in Dingwall, as Derek McInnes' side continued their wretched recent run.