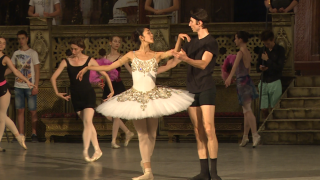 When Russia kick-off against Croatia in Sochi on Saturday, seeking to earn a place in the semi-finals of the World Cup, spare a thought for the dancers of the Bolshoi Ballet.

You may have seen the image that so perfectly illustrates the manner in which football – rarely top of the country's sporting and cultural agenda – has captured the public's attention.

Posted as part of an Instagram story by Brazilian company member Bruna Gaglianone, the picture showed ballerinas in full costume crowding around a smartphone to watch the hosts stun Spain on penalties in Moscow and reach the last eight, against all expectations.

Shared on Twitter by a former colleague, it quickly went viral.

Dancers of the Bolshoi ballet following yesterday’s football match backstage during a performance of RaymondaPhoto via Bruna Gaglianone July 2, 2018

Gaglianone later informed her followers the Bolshoi will be performing Romeo and Juliet this weekend, and "probably the game will start in the middle of the ballet, to general despair".

Their fellow artists in Rostov-on-Don's State Ballet and Opera Company are more fortunate.

They will be able to tune in, along with millions more, having finished the special season that saw them postpone their traditional summer break to stage performances coinciding with the city's World Cup hosting duties.

The programme proved a hit with visitors - supporters of South Korea and Mexico were spotted by Omnisport among the audience for Swan Lake, two nights before the teams met in a group-stage clash at Rostov Arena, and hundreds of free tickets were given away to visitors with FIFA Fan IDs.

So, to business.Normally the state ballet and opera company takes a summer break but the show must go on during the Tonight, Tchaikovsky’s Swan Lake. June 21, 2018

Vyacheslav Kushchev, the theatre's artistic director, took his family to see the city's opening match between Brazil and Switzerland, and told Omnisport about the theatre's experience of football fever.

"Of course, everyone is rooting for Russia," he said.

"But also, we are cheering for beautiful football.

"In general, this championship brought so many surprises. The intrigue of art is fully embodied in this World Cup. This is really a great football celebration.

"Just when the working day begins, everyone will talk about the latest football-related news before sitting down at the desk or start rehearsing on stage. Each goal, each game, the prospects of the teams will be discussed.

"There are truly dedicated football fans among our theatre staff members. It is a sincere love for football. As soon as matches begin, the TV is on in our theatre cafe, some even run to the Fan Fest. For our staff, this is a big celebration."

Here's a look behind the scenes at our interview with Vyacheslav Kushchev, the artistic director of Rostov's State Musical Theatre, who spoke to us about the parallels between football and performing art, and their season of performances during the July 5, 2018

When Kushchev and the theatre's performers go to the stadium or tune in on TV, they are sure to recognise something of themselves in the idolised figures holding the world's rapt attention.

"For which of them is it harder? I don't know. I know that only a [person] who is gifted can reach the top in the art of football or in the art of performing on stage. But this talent must be multiplied by … colossal labour.

"A violinist or pianist starts working with the instrument when he is five, six, seven years old.

"Football is also a sport and an art that is studied for the whole life. Football players begin training at the age of four or five.

"And this is a titanic work … only sincere work with such devotion can result in an outstanding performance. Look, some balls that fly into the net - it's incredible, it's unclear how a person can score like this.

"And the violinist, the vocalist, the ballet dancer and the football players are the professionals, who, in my opinion, have a lot in common."

“WELCOME all football teams and fans!”, proclaims a banner above the entrance to the theatre.Designed by Soviet architects in the 1970s, it wasn’t finished until 1999, nearly a decade after the break up of the USSR June 21, 2018

Kushchev was disappointed by the cagey contest between Switzerland and a Brazil side who, despite joining Russia in the quarter-finals, are still waiting for Neymar to hit top form at the tournament.

The eyes of the sporting world have been fixed on the Paris Saint-Germain star, particularly as Cristiano Ronaldo and Lionel Messi were unable to prolong the campaigns of Portugal and Argentina respectively.

And the scrutiny applied to the game's best is immediately familiar to the soloists and principals occupying the glare of the spotlight on stage.

"Their pressure is approximately the same," Kushchev said.

"[Cristiano] Ronaldo, [Rudolf] Nureyev, the prima of the Bolshoi Theatre [Svetlana] Zakharova, and other great players are treated equally.

"The audience is very demanding and requires a virtuosic performance on stage or playing on the field.

"A delightful dance on stage and an amazing pass of the ball - these are the same tasks that the masters set for themselves.

"The audience cannot always understand how difficult it is to fulfil all of this. The public demands spectacles.

"But masters and professionals understand and treat performers more respectfully, they are more merciful to the mistakes that occur on stage and on the field."

Such is the nature of the industry, even the very best classical singers, musicians and dancers can only dream of enjoying the audience of hundreds of millions that tune in to the World Cup every four years, but Kushchev does not intend to hold a grudge against a kindred medium, one in which aesthetics, passion and drama are just as highly prized.

"Of course, the fact that there are not so many fans in theatrical art is frustrating. As a theatrical worker, it makes me sad," he said.

"I would like people to also have a great interest in ballet, opera, choreography, virtuosic play on musical instruments. But this is an elitist art, although I would like it to be more popular.

"But it is natural that football has millions of fans. This is a very beautiful game."