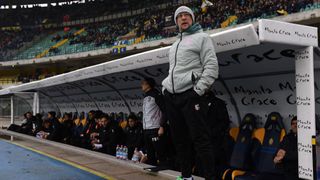 Having defeated fellow relegation-threatened side Hellas Verona 1-0 on Sunday, Palermo captain Stefano Sorrentino claims head coach Davide Ballardini did not interact with his players on matchday following a row between the two men.

Ballardini reportedly tried to drop Sorrentino for the crunch match at the Stadio Marc'Antonio Bentegodi only for club president Maurizio Zamparini and the rest of the squad to seemingly side with the skipper, prompting Ballardini, who replaced the sacked Giuseppe Iachini in November, not to perform his duties on Sunday despite being present on the sidelines.

Franco Vazquez struck a first-half winner that saw Palermo climb six points clear of the drop zone, and goalkeeper Sorrentino launched a scathing attack on his coach after the victory.

"Ballardini did not speak to the team before the game, at half-time or after the match," he was quoted as telling Sky Sport Italia.

"The last two days were chaotic. I will not allow anyone to insult or doubt the professionalism and moral integrity of this team. If they do, then they have to deal with me.

"Did Ballardini doubt their moral integrity? You said it, not me. I reacted the way I did yesterday because that's what I am like, I am face to face.

"I want to thank the staff and the Palermo fans for being close to me, but above all my team-mates because what they did yesterday evening is one of the many things that will remain in my heart. They came out and made it clear they were on my side."

Sorrentino praised the team for getting the job done without the coach on the sidelines and flagged the possibility of Ballardini following Iachini out the door at the Stadio Renzo Barbera.

"I'd never been in a situation like this before," he said of the unsupervised game.

"What we saw today is that the team played basically by itself, without a coach, showing heart and unity to win a six-pointer.

"Whoever comes after Ballardini will find a team with heart and unity. I don't know if the coach will be sacked, I just want to say that if he is … it'll be the second time this season our tactician has been fired after a victory."

Palermo director of football Manuel Gerolin described Ballardini's decision not to coach the players as 'a moment of reflection' for the former Lazio coach.

"It has been a stressful week for Ballardini, who has preferred to take some time out," he was quoted as saying to reporters.

"It's a moment of reflection for him."