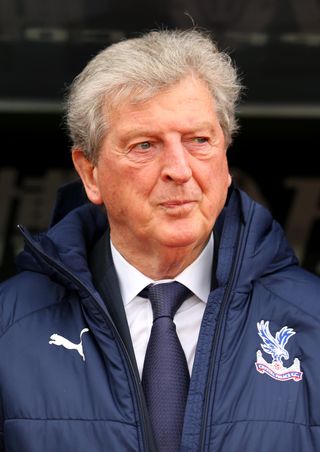 The 21-year-old defender has been linked with Manchester United after enjoying an impressive breakthrough season at Selhurst Park.

And Hodgson is confident the defender, who still has three years to run on his contract, will be a Palace player next term.

“I have no reason to fear that Aaron won’t be continuing here,” said manager Hodgson. “He has a contract and he seems happy enough with us.

“It is a fact of life that when you have got players who do well, they are always going to be coveted by other clubs.

“We’re not naive. We understand football works that way, but he has signed a long-term contract and we signed him to be a long-term player with us.

“He knows he is very well appreciated and liked here, not just by the staff at Crystal Palace, but the supporters, too.”

Palace travel to relegation-threatened Cardiff for their final away fixture of the campaign on Saturday evening.

But Hodgson, whose side are second only to Manchester City in terms of points scored on the road this calendar year, will be without Christian Benteke.

The striker has endured a difficult time of late, but was on the scoresheet in Palace’s recent impressive win at Arsenal – remarkably his first goal of the season.

“Christian took a nasty blow to his cheekbone in an accidental collision with Michael Keane [in Palace’s draw against Everton],” added Hodgson.

“So he is suffering from that blow and he has needed treatment. He hasn’t been able to train with us this week.

“It is very unlikely that he’ll be fit for Saturday but we haven’t ruled him out for next week’s game.”