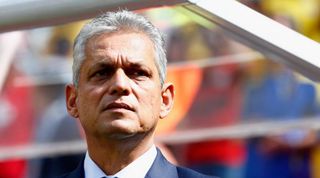 The South Americans played out an entertaining 0-0 draw with France on Wednesday, pushing Didier Deschamps' men all the way as they desperately sought a victory.

However, the result proved insufficient to secure a last-16 berth as Switzerland beat Honduras 3-0 to claim the second qualification spot in Group E.

Rueda revealed that his contract had effectively ended after the match and, although his future now lies in the hands of the Ecuadorian Football Federation, he would like to continue in the role.

"My contract ended and everything is up to the people of Ecuador," he said. "I think I have done a good job.

"We've got some (new) players who will be assets to the team.

"Ecuador like me and my family feels comfortable with the country and that's also an argument (to stay).

"It is my intention and hopefully everything is positive. We must make a sensible assessment."

Ecuador winger Jefferson Montero, meanwhile, has already switched his focus back to club football, confirming that he will be leaving current employers Monarcas Morelia to head for a European side.

He told ESPN Deportes: "It's certain that I'll leave the league, but let's see where I'll go. We expect to sort it out within the next few days.

"I already have an offer, the club are handling it. Let's see where I'll go but for now I have some days off.

"I can tell you that it won't be Mexico. It will be Europe and thank God we are working on it, I hope it works out."