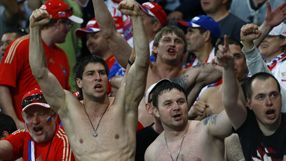 The Russian FA was fined 30,000 euros for similar incidents as well as for a supporter entering the pitch when Russia played co-hosts Poland on June 12, an occasion marred by fighting amongst supporters before and after the match in Warsaw.

The Russians were also fined 120,000 euros when about 30 fans attacked stewards in Wroclaw leaving four hurt following their 4-1 win over the Czech Republic on June 8.

"Some people in the stadium carried out acts which were unworthy of real football fans," the Russian football federation said in a statement two days later.

In a poor tournament for Russia on and off the pitch, UEFA also said it would dock the Euro 2008 semi-finalists six points in qualifying for the next European Championship if their fans are involved in similar incidents to those in Wroclaw.

Russia failed to reach the knockout stage of the tournament after finishing second-bottom of Group A.

Separately, European soccer's governing body also opened proceedings against Portugal on Saturday after a fan tried to enter the pitch during their 1-0 quarter-final win against the Czech Republic at the National Stadium on Thursday.

"The UEFA Control and Disciplinary Body will deal with the case on Monday June 25," UEFA said in a statement.