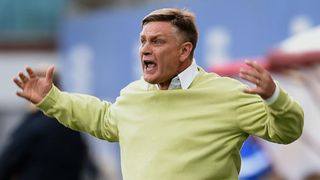 Despite continuing their late-season flourish, Torpedo Moscow were relegated from Russia's top tier on Saturday along with Arsenal Tula.

Valeriy Petrakov's men extended their unbeaten run to five matches as Vladimir Rykov and Aleksey Pugin found the target in a 2-0 win against Mordovia Saransk.

However, Ural claimed a 3-1 victory over Terek Grozny while Rostov drew 1-1 with CSKA Moscow to salvage relegation play-off spots, setting up clashes with Tom Tomsk and Tosno.

Nothing less than a victory would have given Arsenal Tula hope of survival but they finished bottom courtesy of a 5-1 hammering at the hands of Kuban Krasnodar.

Sergey Tkachaev scored twice at Stadion Kuban as Tula signed off a disappointing season on the back of a heavy defeat.

Ufa finished a point clear of the bottom four after holding fifth-place Rubin Kazan to a 1-1 draw, with none of the top seven sides moving on the final day of the campaign.

Champions Zenit extended their winning margin to seven points with a 1-0 win over 10-man Lokomotiv Moscow in what will likely be captain Danny's final game for the club.

Krasnodar missed the chance to finish in the second and final UEFA Champions League place as they could only draw 1-1 with Dynamo Moscow.

Roman Shirokov cancelled out Balazs Dzsudzsak's opener at the Arena Khimki with both sides due to compete in the Europa League next term along with Rubin Kazan.

Spartak Moscow were unable to reach the top five prior to the weekend and they ended their campaign with an action-packed 3-3 draw in the capital.

After Quincy Promes and Vyacheslav Krotov brought the hosts back from two goals down, Bohdan Butko scored four minutes from time as Perm looked on course for a first away victory of the season.

However, Netherlands international Promes levelled in the final minute to salvage a point for Murat Yakin's men.