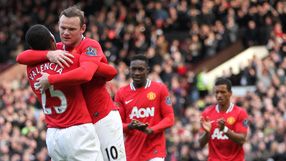 The equation is simple for Sir Alex Ferguson's side. Beat Everton at home on Sunday, then secure victory at local rivals Manchester City on April 30 and the Premier League silverware will remain safely locked in the Old Trafford trophy cabinet.

With four matches to play, United (82 points) hold a five- point lead over City (77), who face bottom side Wolverhampton Wanderers later on Sunday and should at least remain in contention for another week to set up a crunch showdown on their own turf with their bitter rivals.

City manager Roberto Mancini has written off his side's hopes of a first English title since 1968 but Ferguson predicted there would still be "twists and turns" after the weekend demolition of Aston Villa, saying experience told him that "there's always something can bite you on the bum."

"There have been ups and downs during the season, but we've got ourselves into a great position and we've got to make sure we finish the job now," Young told United's website.

"We've never been out of contention but to be in the position we're in now is fantastic. A lot of people wrote us off when City were a few points clear with a superior goal difference, but we've gone about our job in the right way and everyone in the squad has made a contribution.

"And we've done what every other United team seems to do and come strong in the second half of the season."

City's recent drubbings of West Brom and Norwich, scoring 10 goals in the process, are evidence that they have far from thrown in the towel, and a rampant Carlos Tevez and Sergio Aguero will fancy their chances against a Wolves side eight points adrift of safety and looking doomed to relegation.

The fight for Champions League places alongside the two Manchester clubs grows ever more intriguing.

Arsenal (64 points from 34) still have a grip on third place despite a surprise home defeat by Wigan Athletic on Monday but will need to quickly put that loss behind them when sixth-placed Chelsea (57 points from 33) visit at Saturday lunchtime.

Arsenal are set to be without playmaker Mikel Arteta after the Spaniard left Emirates Stadium on Monday in crutches and wearing a protective boot on his right foot after limping off early.

For Chelsea, who should still be on a high after battling to a 1-0 Champions League semi-final first leg win over holders Barcelona, defender Branislav Ivanovic is suspended and David Luiz is out with a hamstring injury.

Tottenham Hotspur, in fourth, must quickly bounce back from last weekend's 5-1 FA Cup semi-final thrashing by Chelsea, when they travel across London to face relegation-threatened Queen Park Rangers at Loftus Road on Saturday.

Spurs are level on 59 points with Newcastle United who host Stoke City.