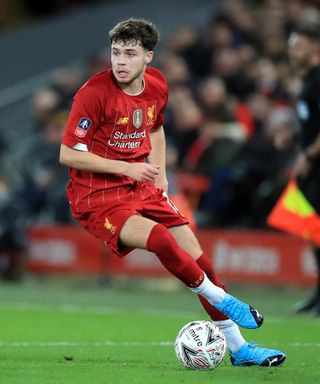 Williams has been capped by Wales at Under-19 level, but that does not rule out the Wrexham-born full-back – who has English grandparents – playing for England at senior level.

The 18-year-old’s breakthrough at Anfield this season – he has made four senior appearances and was part of Liverpool’s FIFA Club World Cup-winning squad in December – has sparked reports that England are monitoring Williams.

“But Neco has come through the (Wales) system. That doesn’t always happen, ideally you want that to happen.

“The likes of Paul Bodin, Rob Edwards, Rob Page (Wales age-grade coaches) have enjoyed working with him and he loves playing for Wales.

“So we’ll have to wait and see until March.”

Another win ✅ another goal ✅ through to the elite rounds ✅ @FAWaleshttps://t.co/qyCYpd9BeK— Neco Williams (@necowilliams01) November 19, 2019

Wales play home friendlies against Austria and the United States next month in the build-up to this summer’s European Championship.

Williams is expected to be called into the Wales senior squad for the first time and get the opportunity to push his case for a place in Giggs’ Euro 2020 party.

“This is the last chance for me (before Euro 2020) to get to see these players I’ve maybe not seen a lot of,” Giggs said.

“We’re obviously looking at Neco because he’s been playing for a brilliant team and he’s done really well when he’s stepped up. So we’ll have to wait and see.

“When a player makes a few appearances for such a big club like Liverpool then suddenly you’re catapulted into the public eye.

“But the quality he’s shown when he’s stepped up to the first team has been really good. It’s exciting.”

Giggs has handed several youngsters their international debuts since being appointed Wales manager in January 2018.

Daniel James, Connor Roberts, Chris Mepham and Joe Morrell are just some of the youngsters who have won their first caps under Giggs and blossomed on the international stage.

“I am not afraid of playing young players,” Giggs said. “Hopefully when players are coming through and they have a decision to make, they will see that.

“It does not matter whether they are 35 or they could be 17. It does not really matter to me.

“Sometimes experience can help but the exuberance of youth is huge and we have seen that.”