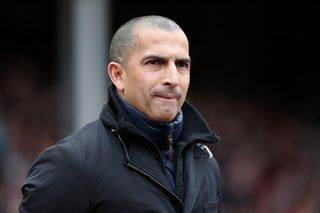 Sabri Lamouchi admitted Nottingham Forest’s failure to beat QPR was another missed opportunity, but refused to be critical of his players following their 0-0 draw at the City Ground.

Mark Warburton returned to his old club to deliver a slight blow to their Sky Bet Championship promotion hopes, as his Rangers side held out for a point.

Forest missed some good opportunities, particularly during a first half when they also had a Joe Worrall header ruled out when it was judged that the ball had been moving when Joe Lolley delivered the decisive corner.

Beyond their lack of cutting edge in the final third, though, Lamouchi felt his side’s performance merited more.

“Two more points today would have changed a lot,” he said. “We missed an opportunity and it is not the first time, but I hope it will be the last time.

“We must keep going. We need to play in the same way and, in the last third, we must find more efficiency.

“It was one of our better performances. The players tried until the end. But at the end it is a big frustration. I said to the players that we defended well, which was good.

“My players were very down, but I told them that, when I need to complain about them, I will complain, but today I cannot.

“If the Worrall goal had stood, the situation would have been different. Sometimes decisions go for you, sometimes against you – but rules are rules. After that, the players played with the right mentality; they played in the right way.”

Warburton, who managed Forest for nine months in 2017, admitted that it had meant more to see his side produce a gritty display against his former club.

“Obviously it means a bit more. When you have managed a great club like Forest you want your team to come here and do well, it is as simple as that,” said Warburton.

“Forest are battling hard, they are pushing hard. We had to stand up as a team and we did. I thought we showed them too much respect in the first 20 minutes.

“But we had two big chances in the game and I am delighted with the players, because the point was well deserved. Forest are a very, very talented team.

“They would have fancied moving up the table if they could pick up three points today, because of the other results. But we did a good job against them.

“The wind was a lot stronger than the fans might have realised. It was more in our favour in the second half and you saw the impact of that. We were penned in by it in the first half.

“This is the Championship. You see Barnsley win at Fulham and few people are surprised by these results. That is this division. You have to stand up and produce your best, because if you don’t you will get hurt, regardless of the opposition.

“For the disallowed goal, the ball was moving. I am sure Sabri will have been raging about it, but you have to abide by the rules and the rules state that the goal should be disallowed.”