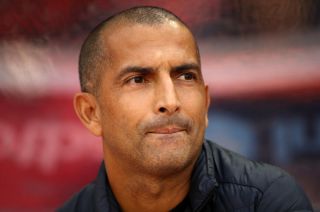 Sabri Lamouchi warned his Nottingham Forest side they must learn to control games better after surviving a Carabao Cup scare against Fleetwood.

Tiago Silva’s goal was enough to earn the Reds a place in the second round and a tie against arch rivals Derby County but Joey Barton’s side pushed them all the way at the City Ground.

Silva’s second half strike, which came after a wonderful turn and finish from the Portuguese, was enough to settle a game that was tight for long spells.

Fleetwood had made themselves tough to break down, playing with determination and organisation in equal measure – and Brice Samba had to make a couple of important saves to keep them at bay late on.

“We were in control for 75 minutes but we must control this kind of game more than we did,” said Lamouchi. “I congratulated Joey because his side came to play and they gave us problems.

“But we must control this kind of game better than we did. We need to play with more confidence and serenity and that was not the case.

“I am positive about the result because the first game in the cup is always a trap you can fall into. They finished the game stronger than we did but we started the better and we deserved to score.

“After the goal from Tiago, we stopped playing. It became more difficult. We gave them the ball, we did not keep the ball and there was a lot of tension until the end. They missed two chances to score and we were a little bit fortunate.”

Barton was pleased with his side’s performance and praised them for the manner in which they implemented his instructions.

“We came here with a plan to take the crowd away from them and settle the lads into the unfamiliar surroundings of a Championship ground,” said Barton. “We did that superbly and limited them to set-plays and corners.

“They weren’t going to hurt us. We wanted a skirmish on our terms. The plan was to change on the 60-minute mark and take the game to them.

“They scored about then so we made changes and after that there was only one side going to score. We spurned some really good chances. We’re more than pleased with the performance, we have to take confidence from that.”