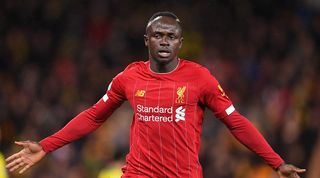 Liverpool forward Sadio Mane has revealed that he did not realise that Premier League winners receive a medal.

The Reds are on course to win their first league title since 1990, with second-placed Manchester City currently 22 points adrift of the table-toppers.

Jurgen Klopp's side are a maximum of four wins away from claiming the championship crown, while they are also protecting a 44-match unbeaten run in the top flight.

Mane looks set to win his first league title since coming out on top in the Austrian Bundesliga with Red Bull Salzburg in 2013/14.

And the Senegal international has admitted that he was not aware that a Premier League triumph would bring with it a winner's medal for members of the victorious squad.

"I heard yesterday that if we win the league, we will have a medal," he told BBC Sport.

"I never knew that happened, but I don't care about medals."

Liverpool have won 26 of their 27 Premier League games this term, an astonishing run that has seen them race clear of the chasing pack.

However, Mane insists that their title tilt has not been as straightforward as it might appear from the outside.

"Easy? Oh, I wish," he added. "We know the Premier League is the best league in the world and every single game you have to give 100% if you want to win.

"It's what we always try and I think it's working very well but we have to keep working hard to get what we want.

"Our target from the beginning was to win the league, so if we win it, it will be great for the club and for the fans."

There has been speculation on Merseyside that a Premier League triumph could lead to a statue of Klopp appearing at Anfield, and Mane believes such an honour would be well deserved.

"For sure I think there will be one because he is a great manager and he is doing very well for the club and the players," he said.

"He has his specific way of doing things and he gives his players more responsibility on the pitch which is really important.

"At the same time, he is very friendly with his players so that is one of his big strengths."

Liverpool travel to Vicarage Road to face Watford on Saturday.