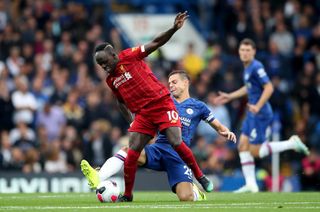 The in-form frontman, who has scored six goals this season, hobbled off in the second half at Stamford Bridge on Sunday with the problem, which was two-fold.

“It was a knock on the bone, around the knee, and a dead leg – that’s an awful combination,” Klopp said.

“He tried everything but I think you saw, there was one counter situation when he really tried and I would say on a non-dead-leg day he will get that ball, but no chance.

Goals from Trent Alexander-Arnold and Roberto Firmino earned Liverpool a 15th Premier League win on the bounce and restored their five-point lead over Manchester City.

Alexander-Arnold’s opener was superb as he fired a free-kick into the top corner from the edge of the area for his first goal since November last year.

“Hendo (Jordan Henderson) wanted it at first and then I think he thought it was a bit too close for him,” Alexander-Arnold told Sky Sports.

“I discussed with Mo (Salah) that I wanted it rolled to make the angle a little bit better and maybe confuse the goalkeeper a little bit, and I’ve been able to put it away.

“I thought it was too close to go over the wall, I didn’t know if the wall was going to jump so I couldn’t go under it, I had to go ‘keeper’s side.

“It was a good roll and I just tried to put it as hard as I can that side with a bit of placement.”

Chelsea put up a fight in the second half, scoring through N’Golo Kante’s fine individual strike, but just fell short.

Their chances were hampered by injuries to Emerson and Andreas Christensen in the first half, meaning two substitutions on defensive changes were used up early.

Boss Frank Lampard said: “Emerson is a similar injury to what he had, with a muscle. When you do that it means you have come back too soon.

“That is not a slight on Emerson, everyone wants to play this game to fair play. But those things shouldn’t happen.

“Christensen is a bang on the knee which we need to assess. It was a shame to use up the two subs in the first half.

“I can’t give you any more than that – the doctor will assess. The first thought is that it’s not too bad but we will see.”