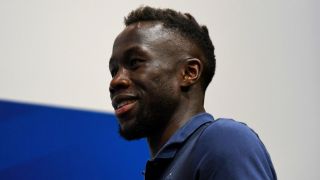 Bacary Sagna hopes the French public will continue to be an inspiration to Didier Deschamps' team in their bid for Euro 2016 glory.

France face surprise package Iceland in the quarter-finals at the Stade de France on Sunday - a venue they will aim to return to seven days on for the final.

Manchester City right-back Sagna was a 15-year-old when Les Bleus memorably lifted the World Cup on home soil in 1998 and he senses a flavour of that optimism returning to the country.

"We have a lot of popularity in France, that's great for the team," he told a news conference at France's Clairefontaine training base.

"Here we can work with tranquillity and that is good for us. Being here is the best.

"We are not thinking about a defeat. We are going to prepare for the match in the best way possible

"We want to keep going and will do the maximum to stay here to the end. We will give everything for the French people.

"It's a good pressure, of course and there is some uncertainty, a lot of waiting. We just finished playing two years of friendly matches, which is not easy.

"We have pressure from the people. We've seen the images from the fan zones when we score and win the matches. It really warms the heart and helps us to advance."

One player who may not feel party to any feel-good factor is striker Olivier Giroud, whose performances continue to draw criticism from the French press and public alike.

Giroud has not found the net since breaking the deadlock in the tournament opener against Romania, although he set up Antoine Griezmann's winner versus the Republic of Ireland in the last-16.

Sagna, who crossed for Griezmann's equaliser in that match, was keen to defend his former Arsenal colleague.

"Olivier is very important for the team," he added. "We have to count on him. He hurts the [opposition] defence, he is a permanent danger in from of the goal. He is a key player for this team.

"He has had a lot of critics during this competition but he can be decisive as he was during the match against Ireland."