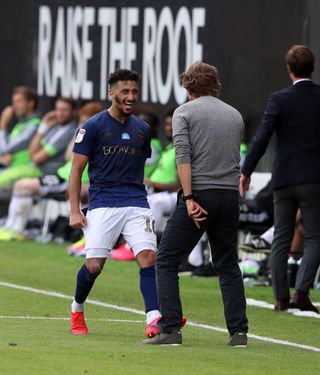 The fourth-placed Bees’ late show left Fulham empty-handed and saw them move to within one point of their third-placed Championship rivals.

Brentford boss Frank has refused to rule out a tilt at automatic promotion despite the gap to top two Leeds and West Brom – and admitted Benrahma will be central to his side’s chances.

“Said is a top player in this division and an extremely important player for our team,” said Frank.

“And we know if we want to have a chance to achieve what we’re dreaming about, he and some of our top players need top form.

“Today I think Said played a fine game but a tough game.

“He was a little bit not top sharp on his touches and decision making. But we still know he can make a difference.

“I was very satisfied with his goal today, because he just managed to be patient, stay away from the ball and work that last line in the box and that’s something we’ve constantly been working with him on.

“I think of course the importance of the local derby we all knew, we all know how much it means to fans.

“That doesn’t change if they are there or not, not at all. So pleased and happy to give the fans this win.

“When it’s a local derby and real intensity that can maybe lack 10 to 15 per cent because of no crowd. No doubt at that.

“But in the end when you scored it didn’t matter if there were fans or not, you can feel the job from all the boys because you can feel it in the game.”

Brentford’s smash-and-grab victory came without forward Bryan Mbeumo, who had to sit out after a positive coronavirus test.

Fulham were left to rue squandered chances in either half, with Bobby Decordova-Reid rattling the woodwork before the break and Aleksandar Mitrovic’s effort ruled out for offside after it.

Boss Scott Parker insisted his side can still push on towards their promotion aims despite the setback.

“Look it’s a blow overall because we’ve not managed to get a result, so we’re bitterly disappointed in that respect,” said Parker.

“I thought we had a very good spell in the second half when we had a goal disallowed. Then the keeper pulled off a great save from Mitrovic.

“We just needed one of those to go in and see out the game.

“So it’s a killer blow, a sucker punch, and the second is a runaway goal when we were trying to push.

“Overall it’s disappointing but we dust ourselves off and move on.

“I was pleased with the players’ application and efforts.”