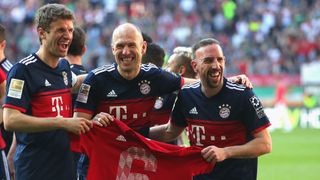 Both Robben and Ribery have deals which are due to expire at the end of the season, though it seems they will be sticking around for a little longer.

French winger Ribery - who had made no secret of his desire to remain at the Allianz Arena - will spend a 12th season with the Bundesliga champions should the extension go ahead.

And Robben will take his spell to 10 years providing he remains until the end of the 2018-19 season, having originally joined from Real Madrid in August 2009.

Bayern officials have had to field questions about the possibility of the experienced pair remaining for much of the season and, while nothing has been signed, Salihamidzic suggested confirmation is not far away.

"We have held several talks with Arjen and Franck and spoke about a deal until June 30, 2019 yesterday," he said. "We will have news in the next days."

Ribery missed two months of the season with a knee injury but has returned to play a pivotal role in helping Bayern retain their title.

The 35-year-old has now won the league in Germany eight times since joining Bayern from Marseille in 2007, while he also helped the club to Champions League glory in 2013, when they defeated domestic rivals Borussia Dortmund 2-1 in the final at Wembley.

Robben has cut a frustrated figure at times this season, but has still managed to play 20 times in the Bundesliga and featured in both legs of Bayern's Champions League quarter-final win over Sevilla.

Bayern are through to the final four of the competition this season too, where they will face Real Madrid, while they also have a DFB-Pokal semi-final to come against Bayer Leverkusen on April 17.