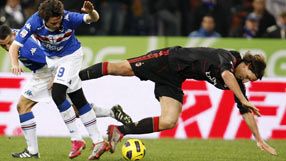 The Swede, who has netted decisive goals in their last four straight wins in all competitions, set up Robinho for the 43rd minute opener but was otherwise slightly subdued. Giampaolo Pazzini then equalised early in the second half.

Juventus missed the chance to move level with Lazio when their good recent form ended in a 1-1 home draw with Fiorentina.

Fiorentina had taken an early lead when Juan Vargas's shot deflected in off Marco Motta but they were hanging on at the end following Felipe's red card for a bad tackle on Milos Krasic..

A Fiorentina fan was taken to hospital as a precaution after a cherry bomb, ubiquitous in Serie A, landed in the away section.

Milan coach Massimiliano Allegri said the trip to Genoa could be his side's toughest away game yet this term and he was right given the application Samp showed, although his decision to introduce the creative Ronaldinho only late on was curious.

The fact Ibrahimovic did not get a sniff at goal was the other major factor for the draw and their over-reliance on the ex-Inter man is partly why Allegri has called for a new striker in January after injuries to Filippo Inzaghi and Alexandre Pato.

The Swede still played a role, though, working a nice one-two with Robinho for the Brazilian to smash home.

"It was a good pass from Ibra... and I finished if off well. We've played pretty good," Robinho told Sky after his fourth Serie A goal since an August move from Manchester City.

The inconsistent forward, who kept compatriot Ronaldinho on the bench for the sixth game in a row, also went close with three efforts from distance while Clarence Seedorf missed a great chance with 15 minutes to go.

Samp had already levelled by then when Pazzini, hat-trick hero in last weekend's win at Lecce, hooked in after Daniele Gastadello had headed a corner into his path.

Milan keeper Christian Abbiati also made an excellent save from Samp substitute Nicola Pozzi's header as the hosts again made light of Antonio Cassano's absence having suffered in front of goal immediately after his suspension last month.

Cassano has been dropped by Samp for verbally abusing the club president and an arbitration hearing next Friday will start deciding whether the Italy forward has breached his contract and is therefore a free agent.

Milan have so far shown no interest in his tricky services despite Allegri's appeal with injury-hit champions Inter Milan reported to be more inclined at a bid.