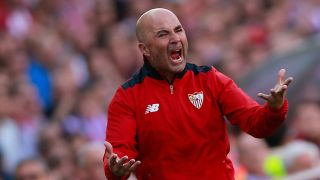 Jorge Sampaoli has confirmed he will accept an offer to coach Argentina if one is forthcoming, with the Argentine Football Association (AFA) previously announcing its intention to appoint the Sevilla coach as Edgardo Bauza's successor.

Sampaoli has yet to agree a deal with the AFA but his departure from Sevilla appears to be inevitable, with Saturday's closing game of the league season at home to Osasuna likely to be his swansong.

Bauza only took charge of eight Argentina matches before he was dismissed, as the team sat fifth in the South American qualification system for the 2018 World Cup, with only the top four spots earning an automatic place in Russia.

Sampaoli, who led Chile to the 2015 Copa America title, confirmed he will only leave Sevilla to take charge of Argentina, rather than for another club.

"My dream from a young age has been to manage my national team. My country has the clear intention of offering me the job," Sampaoli told reporters on Friday.

"I'd only leave here if it were to go and take over my country. It is an offer that I would not be able to refuse.

"This situation is something that is getting resolved now, not earlier, because we had a lot to play for. We can now talk about [the Argentina job]... because we achieved our objectives, but it's not in my hands.

"If they don't sort things out then I won't be going anywhere. I'm not leaving them for another club."

Sevilla will finish in fourth place in the final LaLiga table regardless of their result at the weekend, with Sampaoli's men having secured qualification for next season's Champions League.

And the coach confirmed he intends to take his place in the dugout for the last time against Osasuna despite his expected departure.

"No one will get me out of the last game of Sevilla," he added. "I won that place and I want to enjoy that time. The day should be a party and I would not forgive myself for not leading this last game.

"There is a game that is as important as the first. Our goal was to exceed 70 points and we are looking forward to it. It has been a year of much competition up with the best teams in the league."