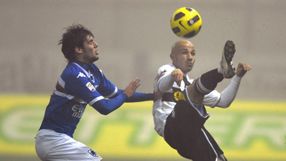 Bulgarian striker Valeri Bojinov made light of poor visibility to score six minutes from time to lift Parma off the bottom.

The win eased the pressure on Parma coach Pasquale Marino, who had been warned about deteriorating results by the club president.

Seventh-placed Sampdoria have scored just once in four games since talisman Cassano was suspended by the club for swearing at president Riccardo Garrone and refusing to attend an awards dinner.

The Italy forward, who had seemed to have repaired his bad-boy image, has since apologised several times.

An arbitration panel, which is also reviewing Cagliari's decision to drop their unsettled Italy goalkeeper Federico Marchetti, is due to rule on whether Cassano's suspension is lawful or his contract void.

Goran Pandev was dropped by Lazio last season after asking for a transfer but won his arbitration hearing and moved to Inter Milan in January.