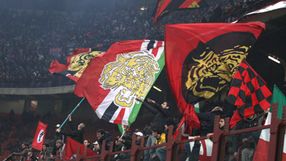 Milan go into the clash with their arch-rivals in 11th place on seven points, five behind third-placed Inter and nine adrift of leaders Juventus. With top players Zlatan Ibrahimovic and Thiago Silva sold to Paris Saint-Germain, the fans have stayed away from the San Siro in their droves.

As of Wednesday only 55,000 tickets had been sold for Sunday evening's clash (1845 GMT), including 23,700 season ticket holders, an unthinkably low number for such an important game.

Only 28,000 people showed up last week to see their team win their first home game of the season, 2-0 against Calgliari.

Last season a crowd of 79,612 watched Milan beaten 1-0 by a Diego Milito goal, while the previous year 80,000 raised the roof as they destroyed Inter 3-0 on their march to the Serie A title.

The crisis has prompted the club to act, releasing an unprecedented video on their website in which captain Massimo Ambrosini and striker Stephan El Shaarawy plead with fans to show up for the match and Ambrosini saying "a derby without you makes no sense."

They hope the midweek 3-2 Champions League win at Zenit St Petersburg could revive interest, after the team showed grit to win a match they could have easily have lost.

"It's the newspapers who say we're in crisis," said manager Massimiliano Allegri who has been under-fire since the start of the season.

"We come into the derby off the back of a great win... we know that the derby is strange game, a game of its own, a great game to take part in and which we will play to our best."

He will most likely start with a similar line-up to what finished the game in Russia, with Giampaolo Pazzini replacing Bojan Krkic up front alongside the impressive El Shaarawy, who scored a magnificent solo goal against Zenit.

Inter are in a healthier position, nicely tucked in third place alongside Lazio, and despite being without the injured Wesley Sneijder, strikers Antonio Cassano and Milito should give Andrea Stramaccioni's side the edge.

At least Serie A in general is shaping up to be one of the most closely contested for years with promoted Sampdoria and Torino in the top six despite suffering points deductions.

Napoli, Inter and Lazio are hot on the heels of Antonio Conte's Juve who are away at Siena on Sunday (1300GMT).

Juve look far from unbeatable this year and Walter Mazzari's Napoli, who take on Udinese at the same time as the Milan derby, look best-placed to push the champions all the way.

A genuine title challenge from the south would surely reinvigorate what was once the strongest league in the world but is now officially fourth in Europe.