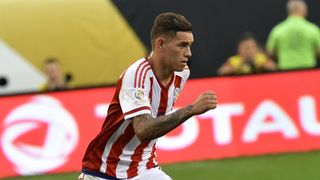 Real Betis have secured the services of Antonio Sanabria from Roma for a transfer fee of €7.5million, the 20-year-old signing a five-year deal with his new club.

Roma will also receive 50 per cent of any future transfer fee should Betis sell the Paraguay international, while the Serie A side have also included a buy-back clause, which allows them to re-sign the striker for €11m in the first two seasons and €14.5m during the third.

Sanabria joined Roma from Sassuolo in August 2014 after a previous spell with Barcelona, but the promising attacker failed to secure regular first-team action at the Stadio Olimpico.

He made just two appearances for Roma in 2014-15 and was sent out on loan to Sporting Gijon last term, where he scored 11 goals in 29 LaLiga appearances.