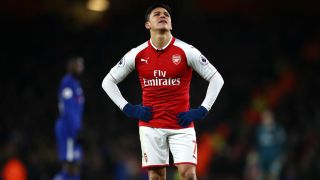 The Chile international, who started last Saturday's 2-2 Premier League draw with Antonio Conte's side, will start among the substitutes at Stamford Bridge.

Danny Welbeck has been named in attack by manager Arsene Wenger, alongside Alexandre Lacazette and Alex Iwobi, despite the latter facing the looming threat of punishment from the club over his alleged late-night party visit prior to the FA Cup exit to Nottingham Forest.

The news is likely to further fuel speculation around Sanchez's future, with Manchester City expected to launch another bid to sign the forward this month.

There is also no place in the squad for Mesut Ozil, who is still struggling with a knee problem, although new signing Konstantinos Mavropanos is among the substitutes.

Conte has opted for a strong side that includes Alvaro Morata and Eden Hazard in attack, while Danny Drinkwater comes into the midfield in place of Tiemoue Bakayoko, who was ineffective against the Gunners last week. Defender Gary Cahill is not in the squad.