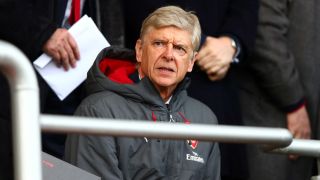 Arsene Wenger claims Alexis Sanchez is "half in, half out" of Arsenal but acknowledged the Chile international must be replaced if he leaves the club.

Sanchez has been heavily linked with a move to Manchester City and Manchester United this month and was left out of the matchday squad as the Gunners lost 2-1 away to Bournemouth in the Premier League on Sunday.

Speaking to BBC Sport after his team gave up the lead to suffer their first ever defeat to the Cherries, Wenger claimed the future of the former Barcelona forward remains uncertain, although he expects a resolution in the next 48 hours.

Questioned on the status of Sanchez, he said: "Half in, half out, you never know this kind of situation during the transfer period.

"That is why I decided to focus on the game."

Addressing the subject further in his post-match news conference, Wenger added: "If Sanchez goes, we need to replace him.

"When you look today we missed many players. If he goes, we have to respond.

"At the moment we try to use players who are completely focused on the club.

"It could happen today, tomorrow or not at all. I didn’t want to travel with him and then he goes somewhere.

"It will be decided in the next 48 hours. It was difficult for him because he was on standby a little bit."

Wenger insisted the absence of playmaker Mesut Ozil, who is also out of contract at the end of the season, was due to injury and not because the Germany international is also close to leaving.

And the Frenchman insisted the Gunners are not on the verge of sealing a move for Brazilian forward Malcom from Bordeaux.

"There's nothing concrete there," he said. "It's better that I don't come out on any specific name."

Record signing Alexandre Lacazette struggled to make an impact up front at the Vitality Stadium, with his lack of confidence coming as no surprise to the manager.

"It's inevitable," he said. "When you don't score, you get like that."