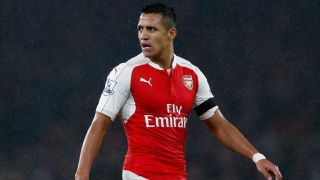 Arsene Wenger will not risk Alexis Sanchez against Liverpool on Wednesday, although the Arsenal boss revealed the forward is eager to make his return from injury.

The Chile international has not featured since November's 1-1 draw at Norwich City due to a hamstring problem.

In his absence Arsenal have moved top of the Premier League and progressed to the fourth round of the FA Cup and his imminent return is sure to give their title hopes a huge boost.

Wenger confirmed that Sanchez will not be ready in time for the trip to Anfield, but the Frenchman hopes to have him back for Sunday's meeting with Stoke City.

"We should have [Mesut] Ozil and [Mathieu] Flamini available [for Liverpool]. [David] Ospina will be tested and for Sanchez I think the Liverpool game will come too soon," Wenger told reporters.

"He has a chance for Stoke and he is going very well. [Tomas] Rosicky is back in full training so the situation is getting better.

"[Sanchez] has always asked me to play but if you listen to him he can always play even when he's injured.

"We try to be cautious but with a muscle injury you never know exactly how big the risk is. What is for sure, he's very close.

"In training, you can see that he's very, very close."

Ozil was among those rested for Saturday's 3-1 FA Cup win against Sunderland after a stellar season that has seen him contribute an impressive 16 assists and five goals in all competitions.

With the Ballon d'Or taking place in Zurich on Monday, Wenger was asked whether the World Cup winner could be a future contender for the prize.

"I wish but as I said I'm not a big fan [of the award]. We are in a team sport and it looks not logical to me to encourage individual effort," he added.

"We live in a society of individualism and to come from a team sport to that is a little contradictory to the root of our sport.

"I am a big enemy of the Ballon d'Or. Who will win, you know as well as I do that Messi will win it. I think so.

"There is no national competition in 2015 and the team who won everything is Barcelona so it has to be a Barcelona player and then it has to be Messi.

"But the only thing is that Neymar is starting to show that he will be a competitor for him."