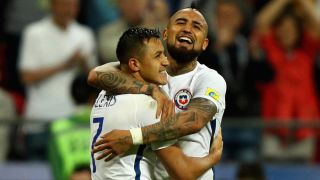 Chelsea head coach Antonio Conte praised Alexis Sanchez and Arturo Vidal, but said the final decision on signings was out of his hands.

Bayern Munich midfielder Vidal, who worked with Conte at Juventus, and Sanchez are among the players linked with Chelsea.

While Conte was unwilling to be drawn on the Chile pair, the Italian was full of praise for two players he said were among the world's best.

"I don't like to speak about other players of other teams but you are talking about two big and strong players, top players for their roles.

"Vidal is one of the best in the world but Sanchez is the same as a striker."

Conte, whose team are third in the Premier League ahead of Wednesday's clash against Arsenal, explained the final say on transfers was out of his hands.

The 48-year-old said he advised the club's hierarchy, but nothing more.

"In this case when I tell that I give my opinion to the club, I try to tell where are the roles we can improve," Conte said.

"Also, on the numerical aspect because in some roles we don't have a couple of players or there is a young player that is not ready to play with the first team.

"If the club ask me some names I try to do this but then it's the club, it's the club that decide the name, the investment, which is the best player for the team."