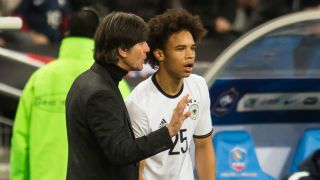 Leroy Sane says he was given good reasons by Joachim Low after the Germany coach opted not to select him for the World Cup.

Manchester City winger Sane was a shock omission from Germany's squad, having contributed 10 goals and 15 assists in a runaway Premier League crowning, with the World Cup holders subsequently crashing out at Russia 2018's group stage.

Low will remain in charge of Germany despite that disappointing performance and the 22-year-old attacker is not holding a grudge against the coach despite being left out.

"I talked to Jogi Low about it. Of course, I also accepted that decision," Sane said to Sky.

"He gave me good reasons to do so. That's why everything is fine.

"It was a great pity for me that they were already out in the group stage. I think it's a bit hard to handle that."

Low, meanwhile, has outlined how he intends to get Germany back on track as they build towards Euro 2020 and the next World Cup.

"There are so many different aspects and we have a hoard of details to continue analysing in the coming weeks," Low said.

"Two particularly important points lie in playing attitude and mindset. We need to rekindle the sense of joy, fun and passion linked to playing for Germany, on and off the pitch. It is of course my role to cultivate this devotion, this emotion and pride once again.

"We have to incorporate this attitude into our style of play, coupled with the current trends in world football."