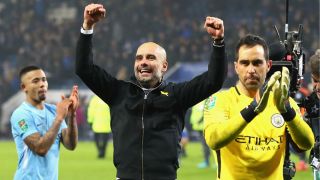 Manchester City's run of 16 consecutive wins in the Premier League will go down in history, according to former player Roque Santa Cruz.

The Paraguay international joined City from Blackburn Rovers in 2009, a year after the club was bought by Sheikh Mansour, whose spending has fuelled City's rise to the top.

Pep Guardiola's men are 11 points clear at the summit of the Premier League heading into the festive period, but Santa Cruz believes the title race is not completely settled, despite his old club's massive lead.

"The results speak for themselves," Santa Cruz said. "16 victories in a row is not normal, it's a historic record.

"I don't know if that's only in England, but maybe in the whole of Europe. The Premier League's a very competitive league and to win all those matches is really very difficult.

"But, having done that, City have not created a huge gap between themselves and United. We're seeing an unusual league this year.

"Let's wait till December finishes, which is a very revealing month in terms of predicting how the competition could end."

City face Bournemouth in the Premier League on Saturday with a chance to stretch their lead to 14 points from Manchester United, who travel to Leicester City later in the day.

Guardiola's men are also on track to challenge for four trophies, having booked a Champions League last-16 tie with Basel, while Bristol City await in the EFL Cup semi-finals.