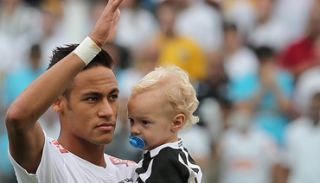 Santos said they had ended a three-year fight to keep the 21-year-old, Brazil's big hope for next year's World Cup finals, and agreed to a transfer, giving him the right to choose which offer to accept, though a decision was not imminent.

"In the face of the offers and the player's contract, the management committee of the club decided to sell the player," Santos said in a statement on their website.

"At a meeting with the representatives of Santos FC's management committee, the forward Neymar Jr was informed about the proposals received by the club and will analyse them in the coming days before making a definitive decision," Santos added in a later statement.

"I'm happy by the interest from both clubs, it makes me proud, but now I'm going home because my mother's waiting," Neymar was quoted by Gazeta Esportiva as saying as he left Vila Belmiro with his father.

Gazeta said Neymar would turn out for Santos in their opening match of the Brazilian championship against Flamengo in Brasilia on Sunday.

Should Neymar go for the most likely option of moving to Barcelona, he will play alongside Argentine Lionel Messi, Golden Ball winner for the last four years.

The Spanish champions are looking to revamp their stellar squad after what by their high standards is a slump during which they have been eliminated from the European Champions League at the semi-final stage for the last two seasons.

Neymar, regarded as former Santos great Pele's heir, was the only non European-based player among the 23 finalists for FIFA's player of the year award in 2012 and has been a target of top European sides for at least three years, including Chelsea in 2010.

So far Santos had rejected all offers and improved his contract, which included sponsorships, to stay at the club and he often attended marketing events.

The ready smiling Neymar became a celebrity, had a part in a television soap opera and admirers imitated his Mohican style haircut.

In November 2011 he said he had signed for Santos until after next year's World Cup tournament but has often said he favoured a move to Barcelona.

However, since the middle of last year a move had become increasingly possible for the current South American player of the year as Santos lost form and he demanded improvements in the squad.

The subject of whether Neymar should go to Europe or not became a topic of debate within the national team given how important some players believed it was for him to get experience of facing the world's top defenders.

Neymar made his debut for Santos aged 17 in 2009 and the following year helped the team win the Paulista (Sao Paulo) state championship and Copa Brasil knockout tournament.