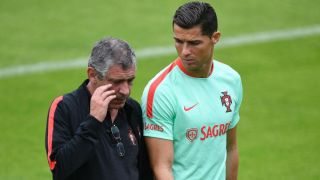 Fernando Santos believes Cristiano Ronaldo could give up to a decade more of service to the Portugal national team.

Ronaldo will captain Santos' side in Sunday's Euro 2016 final against hosts France as he bids for his and his country's first major international honour.

The 31-year-old Real Madrid star, who is Portugal's all-time record appearance maker and goalscorer, could be presented with perfect moment with which to bid farewell if he hoists the Henri Delaunay Cup at the Stade de France.

But Santos insists his star player has much more to give.

"There's a final tomorrow so in that sense, yes, it will be a final for him." he said

"As for Cristiano, he will play for another six, seven or 10 years. Tomorrow will not be his final match, I'm sure."

Taking on the job of Portugal coach reunited Santos with Ronaldo, who he oversaw briefly at Sporting Lisbon before the teenager moved to Manchester United in 2003.

The 61-year-old identified a fierce drive to improve and succeed that, 13 years on, he feels makes Ronaldo the ideal leader of his Portugal side.

"I coached him, not for very long, because a little bit later he went to Manchester and never came back," he told his pre-match news conference.

"He was amazing, he was talented and wanted to win. He was mentally strong. He is always trying to evolve.

"He's a born winner. He always wants to be the best and be more and more perfect.

"Over these past two years, when we have worked together, he has been himself. He wants to be better and better, he is angry at himself when things don't go his way

"The ability to captain our team is standing out now. I think that everyone acknowledges it now and that is the bottom line - the end result of his will to improve everything."