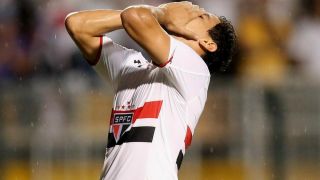 Sao Paulo coach Edgardo Bauza will have some tough decisions to make in regards to his starting line-up ahead of their Copa Libertadores semi-final with Atletico Nacional.

Bauza and Co. host Nacional on Wednesday in the first leg of their semi in South America's most prestigious continental club competition.

Sao Paulo - three-time winners of the tournament - secured their spot in the last four after getting past Toluca and fellow Brazilian side Atletico Mineiro.

But now, as they approach the semi-finals, Sao Paulo have several star players carrying injuries, but Bauza is keeping positive ahead of the crucial tie.

"We will not get to play as we wanted, because we still do not know if we can count on all players," the 58-year-old said.

"We still have two more days to prepare the team, but we will do better. We arrived at a stage that no one bet, and we will defend our stay to the death.

"We have many injured athletes, but you cannot do anything else. Just work. We will try to play a great match to try to get a place in the final."

One of those star players is Ganso, who may not be fit for the first leg, while Bauza is also sweating over the fitness over captain Hudson, but in better news they could be set to welcome back Eugenio Mena.

Mena suffered a hamstring injury in Chile's opening game of the Copa America Centenario last month, which they went on to win, but has returned to training.

Despite all the uncertainties regarding injuries, Sao Paulo possess a fit Jonathan Calleri, who is the 2016 Libertadores' top scorer with eight goals in 10 appearances.

Nacional, meanwhile, head into the contest off the back of a hard-fought 3-3 draw with Alianza Petrolera in the first game of their Colombian Primera A Clausura campaign.

Coach Reinaldo Rueda has been able to welcome back five Colombia internationals who were representing their country at the Copa America, where they suffered a semi-final loss to eventual champions Chile.

"We have a good feeling and we want to translate that onto the pitch. We want to play out football because Sao Paulo will look to suffocate us," said defender Farid Diaz ahead of the clash at the Estadio do Morumbi.

"They are a difficult rival, and we have already come up against them. Now things will change and they will play with more intensity because they have an Argentine coach."

Nacional and Sao Paulo have faced each other 10 times in official competitions, with the latter holding the better record (five wins, two defeats).

Their last meeting was in the Copa Sudamericana semi-finals, which Nacional won 4-1 in a penalty shoot-out after the aggregate score was locked at 1-1.

The winner over the two legs will face either Boca Juniors or Independiente del Valle in the final of the Libertadores.