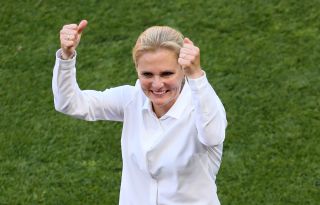 Sarina Wiegman believes she will work with a “world-class team” when she takes over as England Women’s head coach in September 2021.

The 50-year-old is currently in charge of Holland Women and will manage her country at the Toyko Olympics next summer.

After that, she will replace Phil Neville as the Lionesses boss on a four-year deal and is excited to lead England into a home European Championship in 2022 in addition to the next World Cup and 2025 Euros.

“I love my job and 10 years ago there was no opportunity for me to be a professional coach and look where I am right now,” Wiegman said in her first press conference with the English media.

“With the Netherlands we have had a great journey so far and I am very happy I have been the coach of the Dutch national team and very happy we can play the Olympics.

“When I can work after that with the England team, that is a world-class team and a world-class situation I am in and I am very happy and honoured I can be a part of that and bring my experience and knowledge to the team.”

Wiegman lists Louis Van Gaal as an influence and has promised not to be a pain for predecessor Neville between now and September 2021.

She will keep a close eye on the Lionesses but insisted she will not speak to the players and will remain focused on her own task at hand.

“I don’t want to interrupt him or be a pain for him,” Wiegman admitted. “Of course Phil has his responsibility for his team for upcoming 12 months and I will absolutely respect that.

“I will get some information but I will be in the background. The last thing I would want to do is interfere with his work.

“Of course I will have a close look because I will jump in during 2021 but I have the responsibility of the Dutch national team and that is my main focus.”

Before the one-time Jong Sparta Rotterdam coach takes over, she could face the tricky scenario of facing English players at the Olympics.

It was put to Wiegman there may be a conflict of interest if she guided Holland to the final in Toyko and they were against Great Britain.

But she insisted: “I would be really happy to get to the final, so we already have a gold or a silver medal.

“I’m in charge of the Netherlands so I’ll do everything to win that game because it would be so special for me and my players, because we have some players who play in England who know the Great Britain players very well. We want to win every game we play.”

An obstacle in the way of Holland and Great Britain next summer will be the United States, who have won four gold medals.

That hurt. But we're already thinking about what comes next. #WEURO2021. In England. We'll #BeReady. pic.twitter.com/IdmDQXw7oD— Lionesses (@Lionesses) July 2, 2019

It was America who denied Holland a maiden World Cup win in France last year with a 2-0 victory in the final, but Wiegman has full belief the gap is closing on the leading country in the women’s game.

“The history of the US is awesome, but I think other countries can beat them, of course. It’s one game,” the former Holland international added.

“In Europe, the game is improving so much that I think we get closer and closer and I think the USA knows that, so they have to improve their game too.”

Wiegman will spend half her time in England and the other six months in the Netherlands when her role begins next year, but admitted that could change after she starts the post.

Discussions over her coaching staff have not taken place, but the chief executive at the Football Association, Mark Bullingham, was in no doubt they had obtained their number-one target.

“Sarina was unanimously our first choice,” he said. “We have a really exciting period coming up, with Sarina leading us into a home Euros in 2022 and then immediately into the Women’s World Cup in 2023 and then another Euros in 2025.

“Our ambition is really clear, to win a major tournament and we believe that Sarina will give us the best opportunity to do that with the Lionesses moving forward.”

“She is steely and a winner,” Campbell said. “She will be happy to take those tough decisions when they have to be made and she has proved she can stand toe-to-toe with the best in the world.”