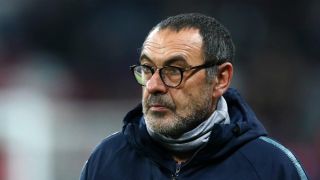 Chelsea head coach Maurizio Sarri insists his players agree with his public complaints about their lack of motivation.

Sarri said he was "extremely angry" after a 2-0 Premier League loss at Arsenal on Saturday, going on to question Chelsea's mentality in the defeat.

The Blues will seek a response when they host Tottenham in the second leg of the EFL Cup semi-final on Thursday, Spurs holding a 1-0 lead.

And Sarri doubled down on his comments regarding Chelsea's motivation when he appeared in front of the media at a pre-match news conference, claiming his players are behind him.

"I didn't attack my players. I told only my opinion about our problems," Sarri told reporters ahead of the Spurs tie. "But I wanted them [to] realise the problem. But I think it's my job.

"Of course, I have the responsibility also of the mental point of view, so the performance was my fault, of course. But I said I am in trouble because it's very difficult to motivate them, but I didn't want to attack them.

"I don't know why [motivating his team is hard], otherwise it would have been easy for me. I don't know exactly the reason, or maybe there are 100 reasons.

"We are trying to do our best, of course. But, for us, it's a problem – not always, but even in some very important matches. So it's really very strange.

"When you play against Arsenal or Tottenham, you usually arrive at the match with a very high level of motivation and determination, but we made mistakes also in this kind of match.

"So it's very strange and we need to improve. But they agree with me. I discussed with the players after the match, and I said to them the same things as in the press conference. It's not a big problem. I want to be direct with them in private and in public."

Sarri reiterated his belief it was the right decision to question the motivation of his players in a explosive news conference that saw him speak through a translator.

"I didn't attack my players. I only explained to the journalists my problem," Sarri added. "They are very good boys.

"I cannot see a big problem with this. Why? Why would I keep it a secret? I said that, for me, it was very difficult to motivate them. Not impossible. It's very difficult.