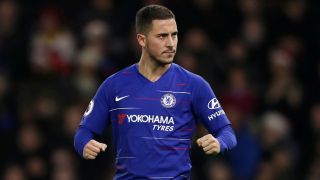 Maurizio Sarri suggested Eden Hazard has a similar impact on Chelsea as Lionel Messi does at Barcelona after his side beat Watford on Wednesday.

Hazard scored both goals, his 100th and 101st for the club, as the Blues claimed a 2-1 victory at Vicarage Road to put themselves two points ahead of fifth-placed Arsenal.

The Belgium star has been directly involved in 19 Premier League goals this season, the most of any player in the competition, and Sarri had only the highest praise for the forward's quality.

Sarri was thrilled with his side's display, even though he felt they perhaps played better football in their 1-0 loss to Leicester City at the weekend.

"Maybe we played with quality against Leicester, but today we had much better application for the 90 minutes," he said.

19 - Eden Hazard has been directly involved in 19 goals in the Premier League this season (10 goals, nine assists); the most of any player in the competition. Leader. December 26, 2018

There were some eyebrows raised when youngster Callum Hudson-Odoi, on in the first half for the injured Pedro, was himself replaced by Emerson Palmieri with five minutes of normal time left.

However, Sarri explained that the decision was a precaution based on an injury concern for the winger.

"He played very well for 55 minutes," said Sarri. "He had a hamstring problem a week ago and [with] 10 minutes to go he had some pain, so we decided to change.

"I can understand [the confusion], but there wasn't another solution. It was too dangerous."

Watford boss Javi Gracia felt his side could have taken a share of the spoils had they been more clinical with some opportunities.

"Players like Willian, [N'Golo] Kante, Hazard, Pedro can do something different," he said. "We tried to be constant and different and defend well. If you take the chances you have, then maybe you take the points."

He added of Hazard: "It is difficult to stop him. It is different if you stop him as a number nine or on the left. He is a player with special quality, speed and skill."