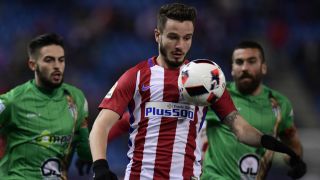 Atletico Madrid midfielder Saul saluted a good year for the club but hopes 2017 is better after the capital team progressed to the Copa del Rey last 16.

Saul and Co. made light work of minnows Guijuelo 4-1 in the second leg on Tuesday as they won the lopsided round-of-32 tie 10-1 on aggregate.

The comprehensive victory capped off a fine year for Atletico heading into the mid-season break, after the Spaniards reached the final of the Champions League, while they finished just three points behind LaLiga winners Barcelona in 2015-16.

Reflecting on 2016, Saul said: "We could have won some titles that we fought for, but it's been a very good year for us.

Atletico are sixth in the LaLiga standings, six points adrift of second-placed Barca and nine behind leaders Real Madrid.

Saul and Atletico will resume their season against Eibar on January 7.