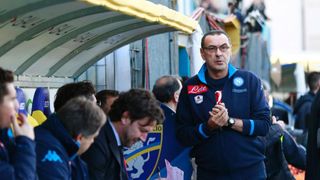 Napoli coach Maurizio Sarri never expected to be top of Serie A at the midway point of the season but warned his side not to ease off over the coming months.

A 5-1 win over Frosinone on Sunday ensured Napoli top spot after 19 games played, with Sarri's men losing just twice in the league since he was appointed as Rafael Benitez's successor in June.

Having finished fifth during Benitez's final campaign in Naples, Sarri's men are on course for a first Scudetto since 1990.

"I love my job, I love to be able to work here in Naples because it's something special to me," Sarri explained.

"At the beginning of the season I would have never thought to reach the end of the first round of the season as the title favourites as Napoli's manager because I have always been sceptical in my career.

"However, I was calm and determined and now I want just to be focused on the next match."

Napoli also remain in the running for the Coppa Italia and the Europa League, with league clashes against nearest challengers Juventus and Inter to come over the next few weeks.

Sarri added: "The season so far has been important proof of self-confidence and maturity, however our position in the standings is not so determinant as we are just halfway through the season.

"I hailed this performance and it is of high satisfaction for the fans as well but that's all. In winter, the championship doesn't exist and I should add that the last time we had been the first this year, we failed the following match.

"We are the title favourites but only based on football stats. I have never seen someone win a marathon after running just half of the race.

"We have encountered many difficulties in this match and we faced the game with grit and confidence and overcame them all. We played with very high pace, displaying the right aggressiveness.

"This is the attitude I like most and we should try always try to display this behaviour on the pitch. When you can repeat what you do during training it is always a high gratification."