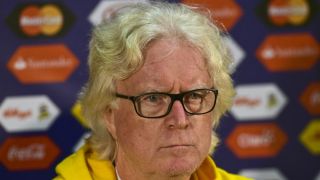 Winfried Schafer said he was proud of Jamaica's game performance in their 1-0 Copa America loss to Uruguay on Saturday.

Schafer said while their efforts against the Copa holders left him feeling upbeat about the Caribbean nation's chances of results in Chile, he also rued the awarding of a free-kick that led to Cristian Rodriguez's winner.

"I don't want to talk about the referee. I want to tell you a big compliment," Schafer said.

"I'm very proud of our team, we played very good football. We had many chances for a goal.

"Tactical discipline was perfect, only the final pass or [Darren] Mattocks' big chance, or two headers in the second half.

The 65-year-old did elaborate on his criticism of referee Jose Argote, who awarded the Uruguayans a free-kick - which was taken by Nicolas Lodeiro, nodded down by Jose Gimenez and finished by Rodriguez.

"We played against one of the best teams in South America, the winner from the last Copa America," the German tactician said.

"We cannot go out and think we are Barcelona, [or] we are Brazil.

"We had a very good chance for the first goal.

"The analysis before the match was very good. We knew when we make the space very short, Uruguay have problems.

"They're always a very good counter-attack team, so we closed the space and there were only long passes from Uruguay.

Cavani erroneously referred to Jamaica as being an "African team".

"Before this match, nobody gave us a chance," Schafer said.

"When I read in the newspaper Cavani thought we had no chance for three points.

"He came in after and I sent him an invitation to the Caribbean.

"I hope I can take him to the Caribbean and we can show him what a beautiful country Jamaica is."